New World Build Guide for the Fire Staff and Ice Gauntlet. This Fire Staff & Ice Gauntlet Build Guide focuses on good AoE damage, and is a nuker setup for running Expeditions, as well as killing large groups of enemies on the landscape. And while it is primarily used in PvE, you can adapt it for PvP as well, by changing a Fire Staff Skill. If you’ve been looking for a solid Mage Build, then this Guide is for you.

The way this Build works is that you’ll begin by opening with Pillar of Fire and Fireball once enemies have been grouped up. If this is in an Expedition, you’ll let the tank gather them, and if this is on the landscape then you’ll run enemies around until you’ve gotten as many as you can handle together. This will soften them up for you. 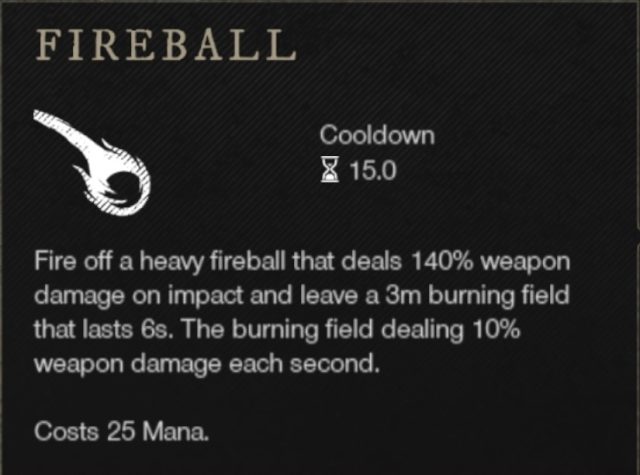 Depending on the situation you can follow up with Ice Storm and Ice Shower to grab enemies, before swapping back to your Fire Staff and using Fireball and Pillar of Fire again. If enemies, get through all that then you’ll finish with Incinerate. You’ll use Entombed when things look grim, and to recover Mana when you are low if you want to save on Mana Potions.

Both the Fire Staff and Ice Gauntlet scale with Intelligence, making them a fantastic pairing, and rather straight forward when it comes to Attributes. You want to increase your Intelligence as high as you can in order to get maximum performance. 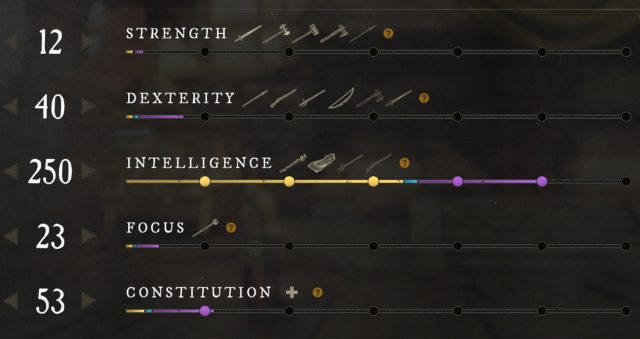 Constitution is also nice to have, since you will take some damage, and you don’t want to die. I’d recommend about 50 or so in order to gain increased consumable healing effectiveness, but more won’t hurt, particularly if you are using Light Armor.

The Skills for this Build don’t really change much, because you’ll be using a similar rotation no matter what sort of content you play. However, if you intend to PvP you might want to swap out Incinerate for Burn Out.

Pillar of Fire – I like this Skill because it’s a ranged AoE that deals extra damage on enemies at full health when upgraded. It’s good to lead with this when you can, to get that extra boost. It has a short cast time, so plan accordingly.

Fireball – This Skill flings a fireball in a small arc instantly. It’s tough to aim, but leaves a burning puddle on the ground that damages enemies over time. Make sure to cast this when you are sure enemies aren’t going to move for best results.

Incinerate – This Skill is an AoE around you that knocks targets back and sets them on fire. Ideally you won’t have to use this when running Expeditions, but it can be very useful on the landscape when you don’t have a tank. Use this to create space when enemies reach you, and then get away and range them down.

Burn Out – Swap Incinerate for this Skill if you intend to PvP to give you an escape when players close on you, allowing you to slide away while also damaging them. You can even use this with PvE if you want, but I find Incinerate is more useful in general, due to the insane tracking that enemies have, allowing them to turn 180 degrees mid animation and hit you while sliding.

Ice Storm – This Skill is the granddaddy of AoEs in New World, and it can deal a significant amount of damage in a short period of time. It has a longer cooldown, so use it only when there are a good number of enemies around. Also, don’t take the Punishing Storm passive though, otherwise when you swap weapons your AoE will end. Hopefully this bug gets fixed soon.

Entombed – This Skill is primarily used to regain Mana quickly, but you can also use it when you’ve accidently pulled aggro or you’re in a bad spot. Sometimes when I quest I drop Ice Storm and then use this while enemies attack me to keep them inside the circle.

Ice Shower – This Skill is great at preventing enemies (and players) from getting to you. It doesn’t deal damage, but it can keep enemies bunched up long enough to AoE them down, or for you to escape as needed.

When it comes to Weapons you’ll obviously want a Fire Staff and an Ice Gauntlet. Look for those that have Intelligence on them to boost damage, and Critical Chance on Fire Staff is good, as is Light and Heavy Attack damage, since you’ll use lots of Light Attacks with this weapon to stack burn on hard to kill enemies. However, Ice Storm cannot Critically Hit currently, so you don’t need this on your Ice Gauntlet. Mortal Siphoning is a good option for Mana gain, as is Refreshing to reduce cooldowns. 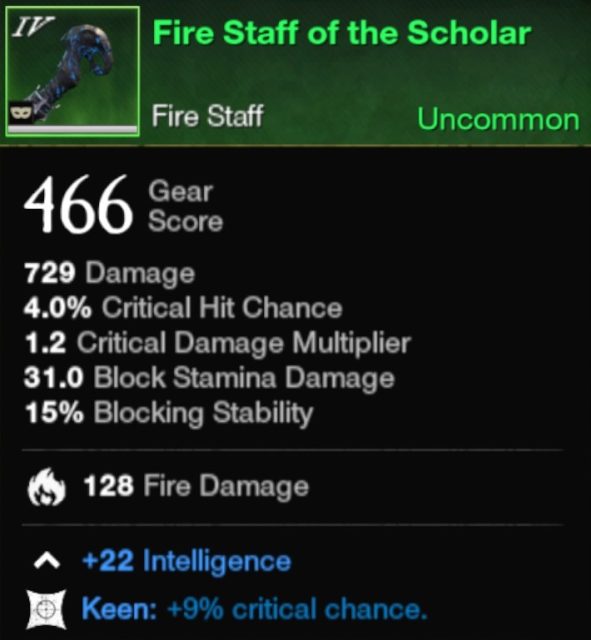 When it comes to Armor you’ll likely want to use Light Armor for the extra damage and mobility, but you can really use whatever Armor type you like. If you have high ping like me, Medium or Heavy might be better, but if you find it relatively easy to time your Dodges well then Light is what you want. Remember you can use a Medium Chest piece and still remain Light if all other pieces are Light. 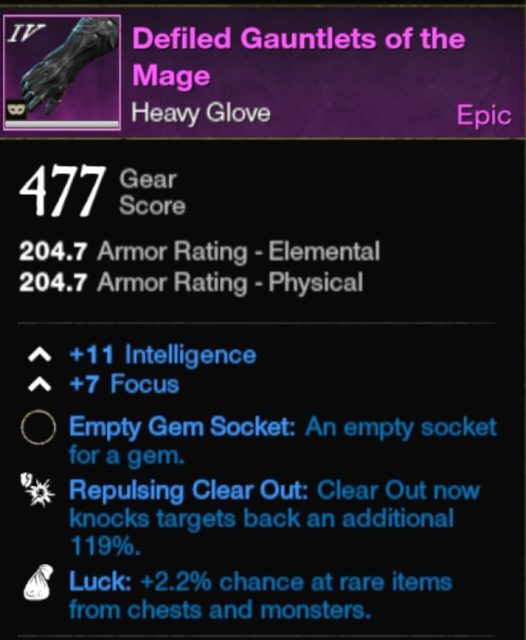 Look for Armor with Intelligence and Constitution on them, and currently the Resilience Perk is bugged actually decreasing all damage you take, not just Critical Damage so that would be the ideal Perk per piece. Diamonds will also help with Damage Absorption, so if they have sockets make sure to slot these if you can.

Many Skills in this Build have short cast times compared to other Abilities with other Weapons, so plan accordingly and make sure to create space before attempting to use them. Otherwise you will just be constantly interrupted, either cancelling the Skill, or just annoying the hell out of you. Use your Slows to get away and then use them.

Many enemies in New World are weak to Fire but resistant to Ice, or vice versa, so it’s not a bad idea to consider slotting a different damage type into your Weapons to help bypass this issue. Lightning Damage is a good pairing with your Fire Staff since Fire Damage is resisted most by Ancients, and they are weakest to Lightning, (or you can take Nature Damage). And Arcane Damage is a good pairing with the Ice Gauntlet because Corrupted resist Ice Damage the most, but are weakest against Arcane. This will balance out your damage when facing these two enemy types. 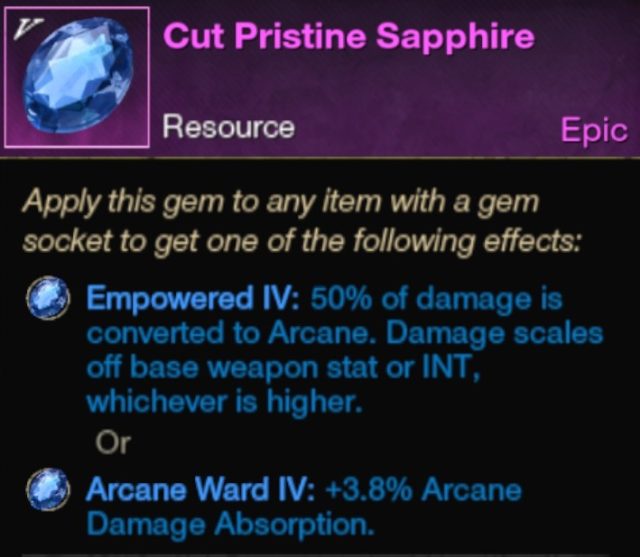 You can use Mana Food with this Build if you aren’t having a hard time with your health, but you’ll likely need some Potions while questing to keep you topped up. Make sure to bring some with you so that you don’t have to rest at your Camp every so often. You can buy these cheap on the Trading Post, or you can craft a bunch of lower tier ones easily enough.

Lastly, you can eat some food just before entering Entombed to give yourself a strong Heal Over Time as you regain Mana. This can help in dangerous situations, or in PvP when you need to heal up but you’re being attacked. Don’t use this method too often if you don’t have a ton of Food, but it can be extremely useful.