New World Build Guide for the Hatchet and Great Axe. This Hatchet Build Guide focuses on surviveability and damage, and is excellent for the solo player who may be having a hard time. This Build is also fantastic in Expeditions, group play, and in PvP, making it one of the best all around Builds in New World. If you’ve been looking for a great Hatchet Build, then this Guide is for you.

The way this Build works is that you’ll use the Hatchet in one-on-one situations to deal incredible damage with Berserk. Hatchets have some of, if not the most, single target DPS in New World, and Berserk increases your damage even further while healing you over time. You’ll use your other Hatchet Skills: Raging Torrent and Feral Rush when they are off cooldown to further boost damage, and you’ll swap to your Great Axe when facing multiple enemies. 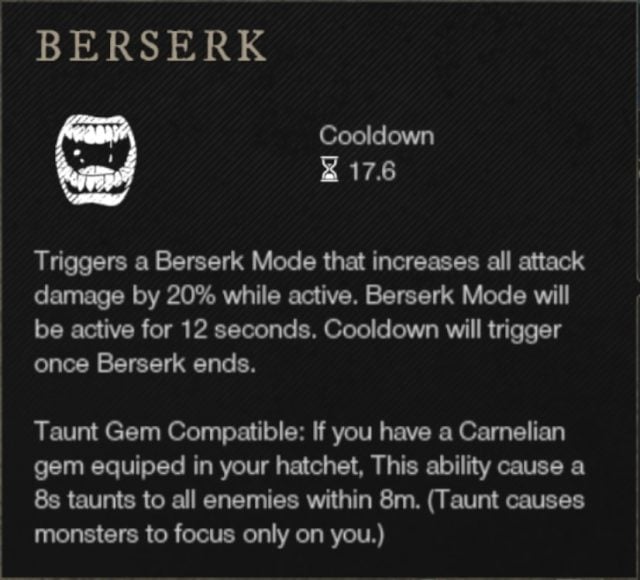 If you pull too many enemies, or you are simply facing larger groups of them, like in an Expedition, then you’ll use your Great Axe to take care of them. The Great Axe has wide horizontal strokes that can hit multiple enemies, and Maelstrom and Gravity Well are key.

Gravity Well can keep enemies grouped up, and deals more damage the more enemies caught in it once upgraded. Maelstrom can hit enemies two times once upgraded in a very large AoE, making it ideal for these types of situations. You can also use Reap for even more AoE, though in a much smaller area.

Because both Great Axe and Hatchet scale with Strength as their primary Attribute, you’ll want to focus the bulk of your Attribute points there. There is currently a bug in New World that slows your character if you go over 250 Strength, so I recommend not going any higher than this for the moment. Once this is fixed, you can take this to 300 for maximum damage.

50 Dexterity is also good, even though Great Axe won’t see a direct increase in damage, Hatchet will and you’ll gain +5% Crit Chance with all Weapon types. This is too good to pass up, so you’ll want to make sure you have this well before reaching 250 Strength. 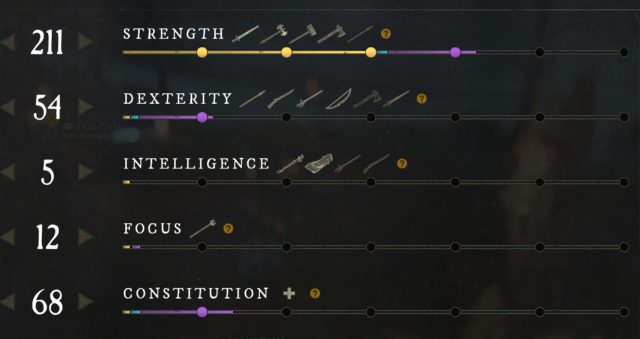 Lastly, you will want some Constitution, particularly if you play solo, to ensure you don’t die too easily. I like at least 50 here, but if you can get this to 100 that’s even better. If you find you’re dying too often, increase this until you are not.

The Skills I use for this Build don’t change a whole lot from content type to content type, making this very new player friendly, since you can take it anywhere. However, if you are playing PvP often you will likely need to make some small tweaks to Great Axe.

Berserk – This Skill might be the strongest Skill in New World, and when upgraded it increases your damage, makes you regain Health, makes you un-interruptable while attacking, and increases your movement speed significantly. You’ll use this nearly every time it’s off cooldown, or when you need to catch up to other players in PvP.

Raging Torrent – This Skill strikes the target with 4 consecutive rapid strikes, dealing incredible damage in a very short amount of time. You have to be careful when using it, as it can be interrupted easily, wasting the ability. Try to time this when the target is CCed, or after it’s just attacked for best results.

Feral Rush – This Skill allows you to gap close a small amount, placing you back in melee range of your foe. It also does very good damage, and can root targets you hit in the back so they can’t move. It’s far better in PvP than PvE, but it’s very good in both, and it can stagger enemies, interrupting them.

Make sure to get the Defy Death capstone because it is a lifesaver, literally and is one of the strongest passives in New World. Not only will it save you in PvE, but also in PvP when the other player thinks they have won, but in reality they lost because you didn’t die and they did.

Gravity Well – This Skill excels in PvP, but can be very useful in PvE as well, particularly when upgraded. Open with this when facing packs of enemies to keep them tightly packed, and to deal some decent damage. Use Maelstrom on enemies caught in it, for best results. You’ll use this in PvP to prevent players from escaping while you unleash your attacks on them.

Maelstrom – This Skill AoEs in a very wide area and hits twice when upgraded. It works best on Gravity Welled enemies, but you want to use it whenever it’s off cooldown when facing multiple enemies. This Skill works great in larger PvP battles, but you’re better off swapping it for Reap if you only do small scale stuff.

Reap – If you’re primarily a PvE player then you’ll want to take this Skill as your third Ability. Reap allows you a smaller AoE, which can heal you, and has a pretty nice follow up when upgraded. It’s great in small scale PvP when your Gravity Well wears off and players try to run away to pull them back to you.

Charge – This Skill is almost an entirely PvP Skill, though it does have some application in PvE. You’ll use this in PvP to gain ground on players trying to keep their distance, and to catch players running away. If you play mostly small scale PvP then you’ll want to replace Maelstrom with this ability, but if you’re playing large scale then you’ll replace Reap with this one.

Make sure you get the Blood Lust capstone as it will not only increase your damage, but also your Movement Speed when you are near enemies and players, which is exceptional for both PvE and PvP.

You’ll obviously need a Hatchet and Great Axe for this Build, and you’ll want to look for these Weapons with Strength on them if possible to further boost damage. Other bonuses you’ll look for are Crit Chance, Bleed or Empower on Crit and Backstab Damage or Crit Damage, as all of these are good options to improve damage.

If you have a Gem slot in your Weapons I highly recommend putting a Cut Emerald for more damage against low health targets, or Jasper for increased damage after you’ve taken consecutive hits (since you will with this Build).

However, currently 20% Gems will give you about a 15% increase to total damage in your Great Axe, but not your Hatchet, so you could put an Sapphire or an Amber into it for constant damage. This is likely a bug and will be patched in future updates, but you can use either for now for more damage all the time.

When it comes to Armor for this Build I highly recommend Heavy Armor for maximum protection. Heavy Armor is arguably the best overall Armor type in New World, and when you’re constantly getting hit in melee combat you’ll want all the protection you can get. This is especially true in Expeditions where you are surrounded by 4 or 5 enemies at once, and in PvP where you can be attacked by multiple players at the same time. However, you can use Medium if you wish, for more maneuverability.

Look for Armor with Strength and Constitution on it for best results, though Strength and Dexterity is not bad either or just Strength. Having Luck on these Armor pieces can help you farm better gear, but is not necessary, and if you have Gem Slots you should drop Diamonds into them for better damage Absorption. 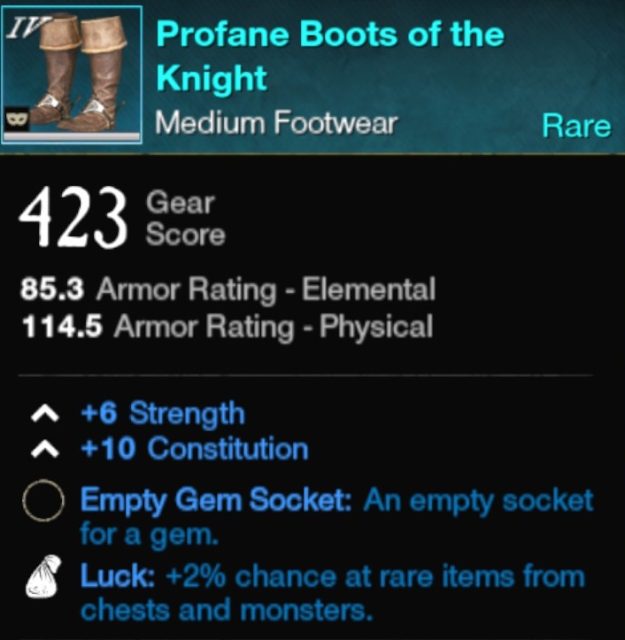 Remember that Berserk does not remain if you swap to your Great Axe, so only use it when you plan to stay on the Hatchet for its duration. This is important, because you might need the healing from it, and swapping weapons at the wrong time could get you killed. Additionally, Defy Death won’t trigger if your Hatchet is not out, so swap to it when you are at low health.

Both the Hatchet and Great Axe deal Slash Damage, which isn’t ideal if enemies resist this type of damage. Thankfully, this is not common, but you may want to consider leveling up your War Hammer Skills as well just in case you run into an area that’s giving you trouble. You can usually DPS through the resistant enemies anyway, because this Build is strong, but having a back up Hammer won’t hurt. 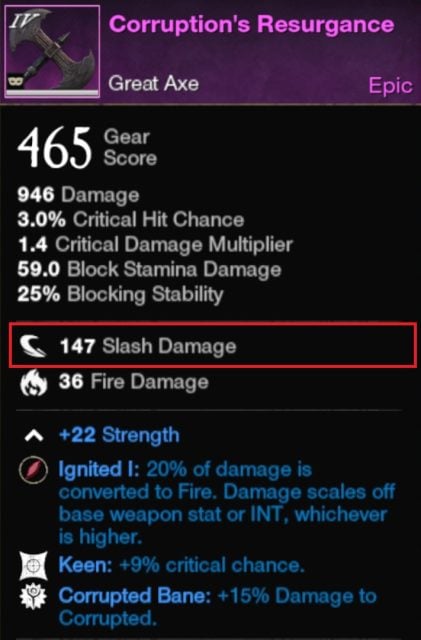 Lead with your Great Axe when facing groups, otherwise use your Hatchet when questing and facing solo enemies as it has better DPS. You can round up enemies and then AoE them down for a good time, and a lot of Weapon XP if you play it right, so don’t waste opportunities to do this when you can.

Lastly, you can animation cancel out of Berserk by pressing Block or Dodging immediately after using it. You don’t need to do this all the time, but it can be a lifesaver in PvP, or in fights where you cannot get any separation. Get in the habit of doing this, as it can really help out.