New World Tank Build Guide for the Sword and Shield. This Sword and Shield Tank Build Guide focuses on Tanking in both Dungeons, as well as in groups out on the landscape in Elite questing areas. It has excellent surviveability due to the Shield passives, and ability to Block a large amount of attacks. But more importantly, it has threat generation, forcing enemies to attack you, protecting your party members. If you’ve been looking for a good Tank Build, then this Guide is for you.

The way this Build works is that you’ll lead with Path of Destiny to get the attention of enemies as you approach and then you’ll immediately follow up with Shockwave. This Skill will taunt enemies if you have a Carnelian Gem slotted into your Hammer, which you should have.

You can then switch to Sword & Shield and attack, then use Defiant Stance to taunt enemies further if you need to, as long as you have a Carnelian Gem in your Sword. Any remaining enemies can be taunted or interrupted with Shield Bash, and then you can use Reverse Stab to reduce the cooldown of your Sword and Shield abilities by a whopping 25%, allowing you to use them again more quickly. 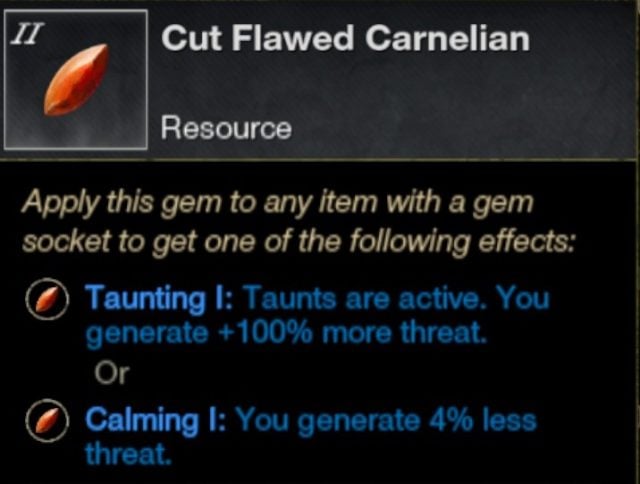 Each trash pull should follow a similar pattern, and Bosses will be slightly different depending on what they do. For instance, if there is a singular boss you’ll likely lead with Path of Destiny and then hit with Shield Bash to Taunt, and follow with Defiant Stance, and Reverse Stab. You can then use Armor Breaker to debuff the boss, increasing all damage your group will do to it, and hit with Shockwave to taunt it again, before swapping back to Sword and Shield.

Attribute distribution for this Build is rather straight forward since both Sword and Hammer scale with Strength. You just need to make sure you have some Constitution as well since you will be getting hit quite often, and you will take some damage no matter how good you are. I suggest a 1.5:1 or 1:1 ratio of Strength to Constitution depending on how comfortable you are with tanking. If you’re not very, then you’ll want to go the 1:1 route for more Health, which will allow you to make more mistakes and survive. Higher Strength, means higher DPS, which can help speed up trash pulls, however. 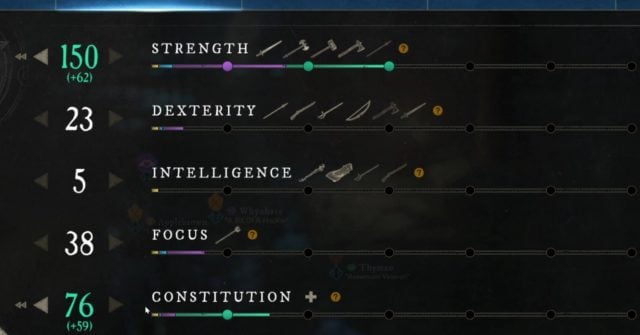 The Skills for this Build are optimized specifically for Expedition runs, but will work fine in just about every PvE scenario. However, it is not 100% optimized for PvP, because you do not have a gap closing ability slotted. I highly recommend if you’re PvPing that you swap out Reverse Stab for Leaping Strike so that you can close the distance on fleeing enemies more easily. You can leave the other abilities, since Defiant Stance still makes you harder to kill, and Shield Bash can stun targets.

Shield Bash – This ability is a single target taunt that helps you maintain control on Bosses and Mini-Bosses, as wells as stuns some of them. Use it to interrupt attacks, and make sure to use it when it comes off cooldown to keep aggro on the Boss, and to prevent it from attacking others.

Defiant Stance – This Skill is an AoE taunt that also buffs your defenses, making you harder to kill. Use this when you are pulling trash to keep them on you long enough for enemies to die. You can alternate between this and Shockwave as necessary.

Reverse Stab – The reason to use this Skill is because the final upgrade allows you to reduce the Cooldowns of your other Sword and Shields Skills by 25%. This is a huge amount and shaves over 5 seconds off of Defiant Stance, which is a lot! It can also transfer negative effects back to the Boss, if you have this Perk on your equipment. 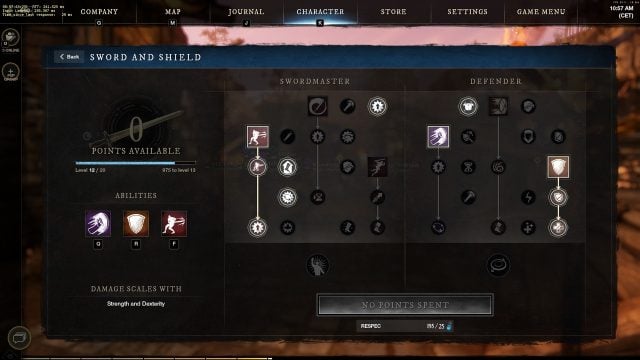 Shockwave – This Skill is another AoE taunt, that also stuns enemies, preventing damage to your party in the process. It’s a good first ability when surrounded to gain aggro on enemies, and to gain some space to setup while enemies are stunned. Alternate between this and Defiant Stance to hold aggro on groups of enemies.

Armor Breaker – You mainly want this Skill to debuff Bosses with the Lasting Trauma passive. This reduces the protection of the Boss by 15%, greatly increasing your party’s damage out put against them. Try to maintain this debuff 100% of the time if you can, as the cooldown and debuff are nearly the same length.

Path of Destiny – The third Skill you use here is less important, and you can take what you like, but I like Path of Destiny here. It allows you to AoE from a distance as you approach, getting the first hits on enemies, providing just a bit more aggro then if you didn’t do it.

There are a lot of good passives in these two trees, and you should pick up as many defensive ones as you can. However, the capstone Leadership increases the damage of your group by 10% while you’re using a Sword. If you can debuff with Armor Breaker and then swap to Sword and Shield you’re group will deal a ton of damage against Bosses, and enemies alike. You might miss out on a defensive passive or two in order to get this, but it’s definitely worth it. 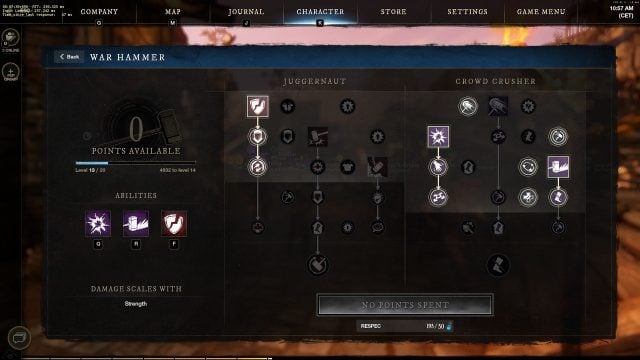 The two Weapons you’ll need for this Build are a Hammer and a Sword, but you’ll also need a good Shield. The Hammer and Sword will both need sockets so you can slot the best Carnelian Gems you can find into them, helping you to generate threat with your Abilities.

Look for Strength or Constitution on these Weapons and Shield, and other bonuses that impact any of the Skills listed above. Fortify on Crit is also good, as it makes you a bit tankier. Also, be sure to use the Shield with the best Block Stability rather than best Defense, as this will allow you to Block more hits before running out of Stamina. Brilliant Refraction is easy to get even before endgame! 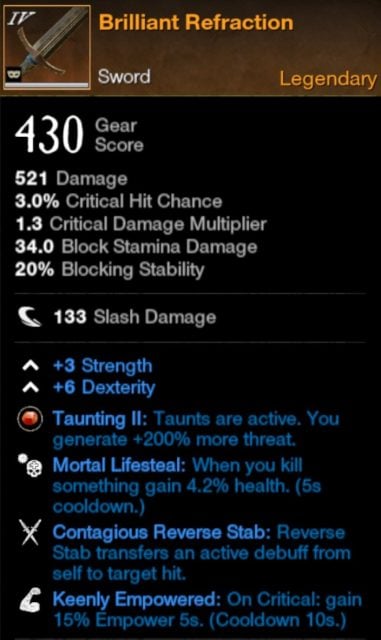 As you might expect you’ll be wearing full Heavy Armor for this Build for maximum protection. You will get hit and you don’t want to die when that happens. Look for Strength and Constitution on your Armor, just like your Weapons, and if you are having trouble finding any, you can get good sets of this from your Faction vendor. It’s not too expensive and it’s rather easy to farm tokens to get it.

Make sure to use Jewelry that gives you Stamina, or gives you Stamina back every so often when you get low in order to help you Block more. The hardest part of tanking in New World is maintaining enough Stamina to keep Blocking, and there are some great Jewelry pieces for this. Check out our Guide on where to find some if you don’t know! 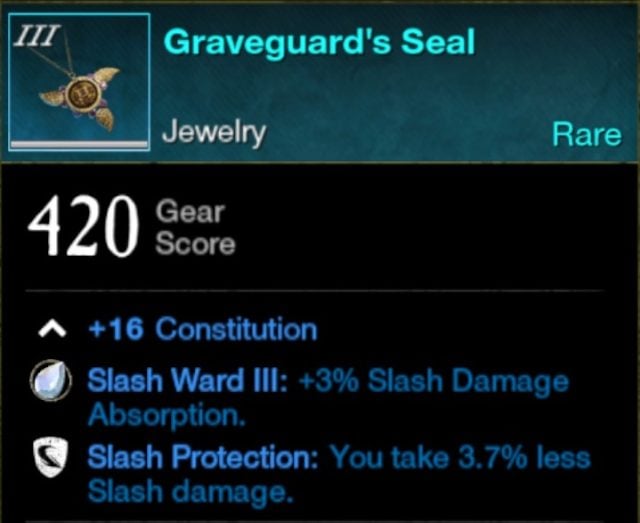 Make sure you eat Food when tanking to help with your HP regeneration in combat. Health food is based on your max HP, so the higher your Constitution the more HP you will regain with each tick. And don’t forget to bring Health Potions either, since you might need them now and again.

Pay attention to the little icon over enemies’ heads when you taunt them so you can see when it falls off. Wait until just after it disappears before you taunt them again because you cannot maintain 100% uptime in an AoE, and you don’t want to waste any time by reapplying when they are already taunted. 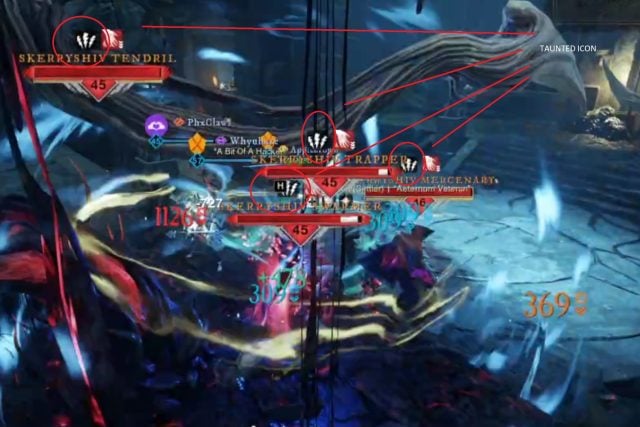 Remember that you can still dodge in Heavy Armor, even if it’s not the best Dodge. Some bosses are hyper aggressive and you may need to dodge from time to time in order to avoid many rapid hits you have to Block. Some chains will just chew through your Stamina, and are best avoided.

Lastly, if you are still having trouble staying alive, drop your points from Strength and just pump Constitution. You’re damage will suffer, but staying alive is more important. You can never have enough health as a Tank, and this will ensure you get the maximum benefit!