New World Build Guide for the Bow and Spear. This Hunter Cyclone Bow and Spear Build that focuses on dealing damage over time, as well as significant AoE damage to destroy enemies quickly, while also knocking them down, preventing you and your teammates from taking damage. This is a PvE Build designed specifically with Expeditions in mind, but can also be used for PvE in general, and can be adapted to PvP should you be so inclined. If you’ve been looking for a good Bow and Spear Build, then this Guide is for you. You should also try our other Builds: Musketeer Build and Whirlwind Build! And make sure to use our Best Early Weapons & Accessories list.

The way this Build works is that when you’re running an Expedition you’ll lead with Rain of Arrows to deal damage and set Bleeding once the tank has grouped enemies up. Then you’ll fire off Poison Shot to set the Poisoned Status Effect, placing your second DoT on the enemy group. Then fire off your Penetrating Shot, hopefully hitting a couple of enemies for mega damage, before charging in with your Spear.

Once you’re in melee range you’ll use Sweep to AoE further, and knock enemies down. Then you’ll follow up with Cyclone to deal even more damage, and then you’ll begin Light Attacking enemies to finish them off, using Javelin to knock enemies down that are attacking you from range. If you ever have trouble staying in melee range without dying, then back away and use your Bow until it’s safe.

Both the Bow and Spear scale off of Dexterity, so having a significant amount of it will help with your damage. You want to look for items that provide you with this when possible, but a mix of Dex/Str is also not bad, nor is Dex/Con. Strength will improve your melee damage, and Constitution will help keep you alive. I like to get to 3 to 1 Dexterity to Constitution, if possible, for maximum damage and some surviveability.

Note that your gear may provide you with a bunch of Constitution, in which case you may not need to place many points here. Just make sure you get to 50 CON so that you gain the passive bonus of +20% increased healing from consumables. Respec if necessary when changing your gear, so that you can maintain this bonus.

The Skills for this Build are optimized specifically for Expedition runs, but will work fine in just about every PvE scenario. However, it is not 100% optimized for PvP, because Cyclone is not a skill you would need there, even though both Sweep and Javelin are exceptional. If you wish to PvP, I highly suggest swapping out Cyclone for Vault Kick so that you can stun players more easily.

Rain of Arrows – This Skill hits in a small ground-targeted AoE for 150% weapon damage, and also sets Bleeding when upgraded. This is your opener and you should begin each pull (if possible) with this ability, taking your time to hit as many targets as you can. Use it the second it’s off cooldown if there are still many enemies remaining.

Poison Shot – You’ll follow your Rain of Arrows with Poison Shot in order to set a second DoT on the group of enemies, causing them to take damage while you melee them. Damage over time is a strength of the Bow, and we take full advantage of it here. Make sure you use this the second it’s off cooldown when fighting Bosses to keep the pressure on them.

Penetrating Shot – This is a great ability to follow up Rain of Arrows and Poison Shot with to hopefully hit 2 or more enemies at increased damage. This happens quite often, and it’s a very fast ability, allowing you to use it as you approach to get into melee range. It’s also very good when you can’t get back to a target to get some burst damage. You don’t need to use it every time it’s off cooldown, but make sure to use it before closing to melee range.

Sweep – After firing the first round of Bow Skills, you’ll close the distance and attack with Sweep to trip enemies. This ability is an excellent AoE, and it can CC, helping to prevent you and others from taking damage. It has a rather short cooldown, and you can reduce cooldowns further by Light Attacking, so you should be able to use this quite often. This ability does Strike Damage, so it’s good in early Expeditions of the game where Thrust Damage is resisted.

Cyclone – Like Sweep this ability does Strike Damage, increasing it’s effectiveness in the earlier Expeditions of the game, which can be a weak point of Thrust Weapons like Bow and Spear. It also hits in a large AoE, allowing you to crank out some damage against many targets at once. Use this whenever it’s off cooldown and there are many enemies grouped up, otherwise use Sweep.

Javelin – This Skill is excellent at attacking and knocking down enemies that are hitting you from range. Use this and then begin attacking them, then hit them with Sweep to put them back down on the ground, so they cannot attack. You can prevent a lot of damage with this Build, making it particularly efficient.

You want passives that increase your damage, extend the duration of your DoTs, and further reduce cooldowns. Bow has long cooldowns, so anything you can do to make these faster is huge. 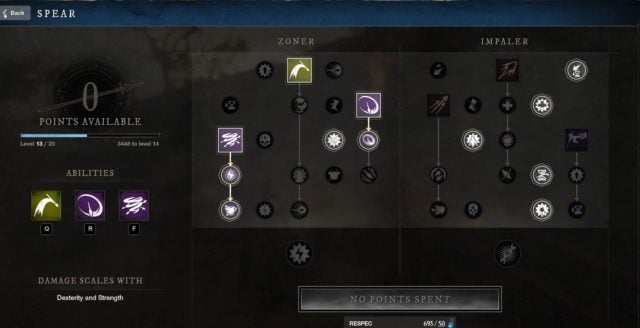 When it comes to Weapons you’ll obviously need a Bow and Spear, and you want to look for those that are going to deal the maximum damage, don’t just look at the Gear Score. Since both these Weapons scale with Dexterity, you want to find versions of these that provide this Attribute.

You’ll also want to look for Crit Chance, and Light Attack Damage , as it’s not always possible to hit enemies in the back to get guaranteed Critical Hits, and you will Light Attack often. If you get a Gem slot, consider slotting an Emerald for increased damage against low Health enemies, or a Jasper for increased damage after you’ve taken consecutive hits. Refreshing is also not a bad bonus, as it further reduces cooldowns.

When it comes to Armor you’ll want to make sure you’re in the Medium Weight category for increased damage, but a decent amount of protection. You shouldn’t get hit as much as some other Builds, thanks to Sweep, Javelin and the Medium Armor dodge, so you can get a way with less Armor than other melee Builds. You want to keep your damage high, so this is a fair trade.

You can equip one Heavy Armor chest, and 4 Medium Armor pieces to stay under the threshold, giving you the best protection possible while also giving you a 10% increase to damage. Look for Dexterity on your Armor, and anything that will help reduce cooldowns even further. 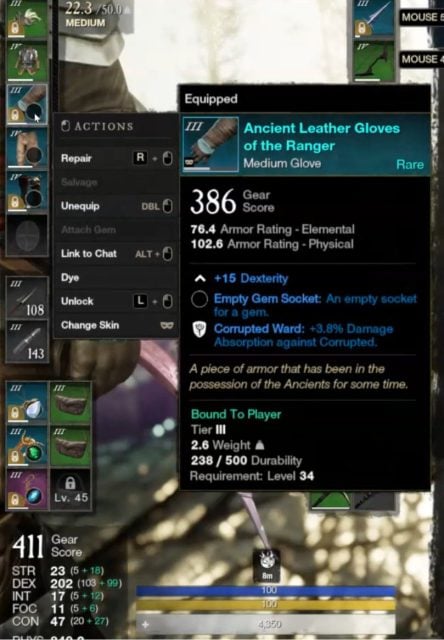 Remember that you can fight with your Bow at range, even if you do less overall DPS in situations where you might get yourself killed by closing to melee. Some Bosses have very wide arcing swings that can clip you, even when they are glued to the tank. Watch for good openings before moving in, and make sure to keep your DoTs on the Boss.

It’s harder to group up enemies on the landscape if you’re playing solo, but you have plenty of damage, so don’t be afraid to pull a few. Use Rain of Arrows in front of where they will be, since there is a slight delay, and then Sweep them when they get near to knock them down. Dodge away if you need, or use Cyclone to finish them off.

As I mentioned, you can use this Build to PvP, but you’ll likely want to swap out Cyclone for Vault Kick for the extra CC. You can also swap out Rain of Arrows, if you’re fighting few players, for Evade Shot or Rapid Shot as well. Both are better suited to PvP than Rain of Arrows, unless you are fighting more than a few enemies.

Lastly, make sure to craft the best Arrows you can use, or purchase them from the Trading Post if you cannot. This will help to further boost your damage, allowing you to deal the most damage you can. These are not hard to make, and they are not overly expensive to buy. Make sure you stock up before an Expedition, because running out of arrows in the middle of one is embarrassing!