In this Death’s Gambit: Afterlife review, we’ll be diving back into a familiar yet refreshing 2D action-adventure platformer that introduces brand new content, quality of life, combat mechanics, and deeper RPG elements. Death’s Gambit is a game that released back in August 2018, and makes a return with a massive free Expansion called Afterlife.

The free expansion is a full scale re-imagining of the original game that redefines all of the existing systems based off the community’s feedback. Death’s Gambit: Afterlife promises to be a love letter to the fans of the original while offering something exciting to 2D Platform enthusiasts.

In Death’s Gambit Afterlife, players take on the role of Sorun who is a soldier sent on an Expedition to Aldwynn to find and claim the “Source of Immortality”. We then find out that Sorun, along with his fellow comrades whom have travelled from Vados were killed by the immortal, Endless, during their journey to Aldwynn – this was deemed to be the first and last Great Expedition.

As the soldiers of Vados fall to their demise, Death arrives and feasts on their souls, but catches the attention of Sorun who is resurrected and gives him another chance, sealing a deal that grants Sorun immortality in exchange of being in service to Death himself. With the power of immortality, you are to travel across Aldwyn, to discover the mystery and secret behind the kingdom, to complete the expedition of claiming the source of immortality, and somehow to uncover the truth behind what has transpired of Sorun’s mother. 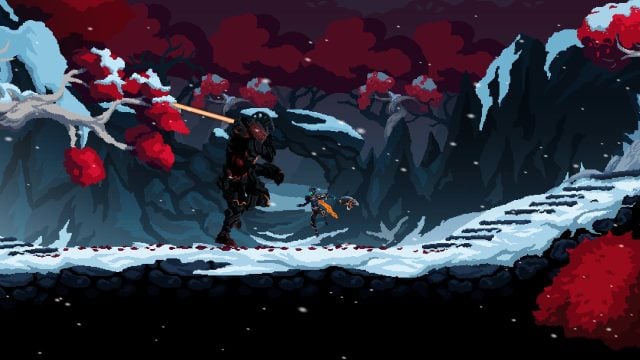 Looking back to the original that was released in 2018, right off the bat, changes have been made such as adding a brief history towards mankind and their obsession with claiming immortality, we are given an idea that the “Source of Immortality” has been around for a long time and that many kingdoms have tried to claim it but have failed and fallen right into the arms of death. Apart from that, a mysterious yet welcoming background to Sorun’s journey to Aldwynn and about his past is given more context, these small additions to the story makes the game more interesting as it helps us better understand the setting, its lore, and an idea as to what the objective of the game is all about.

Another change that we’d like to point out is that all of the NPCs and their dialogues have voice-overs now which makes immersion even more engaging, allowing the player to get to know each character better. Hearing the characters speak with their own distinct voice and accent is a huge plus to the overall experience of the expansion.

The brand new expansion that reimagines the original game introduces a whole new way to explore or even re-explore Sorun’s journey. There are 10 new levels that have been added that sums up to a total of 20 locations to explore, both new and old that offers larger areas to roam and puzzles to solve. 6 new bosses have been added to the roster, old levels have been revamped, gameplay mechanics have been overhauled, new equipment has been added, there are now over 100 talents, as well as alternate endings. Let’s start off with the revamped levels.

In the Afterlife expansion, the first thing you will notice is the field of view, it is now scaled a bit wider to better visualize your surroundings, as well as making combat easier to maneuver.

New levels have also been added such as Sirad’s Sky Tomb, and the Afterlife, but what’s more enticing is old locations being revamped. Areas such as the Obsidian Vale have been changed since NPCs like the imprisoned giant Grimgaud, Zuma the Acolyte of Death, and Ione the spear-wielding warrior, are now found in different sections. Although it may feel like a familiar path to those who have played the original, Afterlife keeps you on your toes and you should expect the unexpected from the many changes added to the expansion. 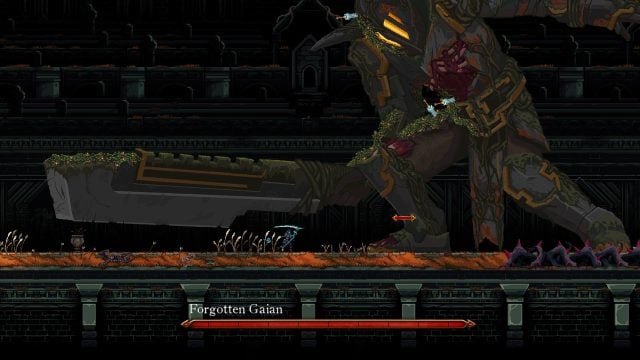 With the addition of Afterlife, Death’s Gambit finally feels like a proper Metroidvania game since each level is now complex and is now larger which forces you to explore, discover unique items, and return to sections that require advanced platforming mechanics.

Another feature that is quite simple yet helpful is the addition of a Map. The Afterlife expansion now adds a map that allows the player to identify their current location, checking the progression of discovering the various locations, as well as marking important aspects of the game such as save points, objectives, boss locations, and such. The 2018 original did not feature a map which was a letdown to those who played the game, and adding such feature makes exploration even better, especially to completionists.

Next, let’s talk about Combat and Character Progression. I have played the original and to my surprise, I am quite amazed with how these features of the game have been revamped. Combat now feels smooth and fluid when it comes to Sorun’s movements. Certain Boss attacks now make complete sense as to how you want to counter or approach them, and additional RPG elements makes character progression worthwhile since you are provided a bit of freedom towards how you want Sorun to play depending on your class, playstyle, and build. 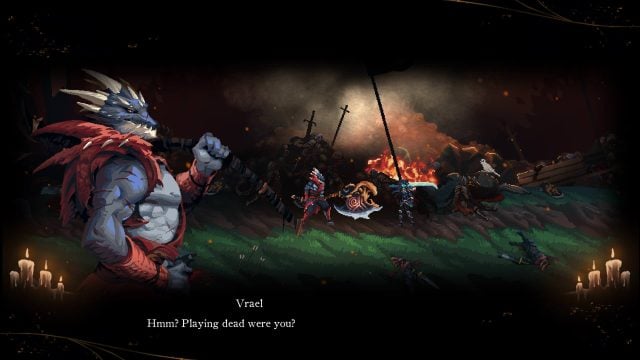 Right off the bat, when you start a new game, a brand new look to how you choose your class is shown, and players can now try out the combat style of each class before committing to it. Each class has been also given a secondary attack of the primary weapon they are wielding, only if there is no secondary weapon equipped.

Sorun can now execute a slide dash to evade enemy attacks or stun enemies with a shield, a perfect parry now automatically executes a counter-attack, a new dive kick mechanic is also added for more aerial mobility and combat, as well as Metroidvania upgrades such as the Double Jump, Air Dash, Crash Down, and the ability to fly which are now rewarded from defeating Bosses. All of these newly added features and changes may be simple but heavily impacts the game and provides versatility in combat, exploration, and the overall experience of the game.

Apart from that, the animation of using plumes to recover health is now faster but overall, heals less. You can also find new items in the game such as the Seed of Knowledge to obtain Talent Points, a new Crafting mechanic, and the addition of crafting to forge unique items. 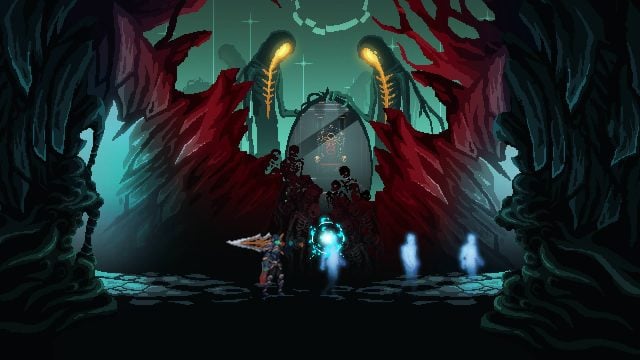 And as far as Character Progression, players can now multi-class through the feature of unlocking a secondary Class Tree. Back in the original, players could only unlock upgrades through the class and general talent trees, now, as you progress through the story, you are able to learn both passive and active abilities by choosing a secondary class tree that you want to focus on, making Sorun a hybrid of your preferred playstyles.

Not only that, an advanced talent tree will also be available at the end of the game. Although character progression is one of the biggest changes added to the Afterlife Expansion, players are still required to kill enemies to obtain Shards that works as the main currency of the game to increase Sorun’s stats and to purchase items and abilities, as well as killing bosses to obtain new skills and acquiring Talent Points. Collecting these shards to increase Sorun’s stats reminds me of games like Dark Souls and Demon’s Souls.

The Afterlife expansion does not stop there since it adds a couple of new equipment to Sorun’s arsenal, you’ll find new and powerful swords, daggers, tomes, axes, spears, scythes, hammers, axes, as well as armor pieces such as helms, capes, boots, together with a variety of consumable items used for combat and exploration.

When it comes to audio and visuals, White Rabbit has improved on some aspects. First off, Audio. For the majority of it, the game still uses the music and audio that was featured in the original game, but there is of course, brand new BGM that is added to new levels and bosses.

The mysterious, yet melodramatic score makes the player feel Sorun’s sorrow, anguish, and pressure of both finding his mother and honoring his comrades by finding the Source of Immortality. Audio is important to each game since it sets the tone and the mood of the player: a sense of peacefulness and serenity can be felt whenever Sorun is in the Central Sanctuary, and an epic score for each boss encounter further heightens the experience and puts the player in the zone of a heroic battle. Also, as mentioned, each NPC in the game has more voice-over dialogues making interactions even better.

As far as Visuals go, the pixel art design brings nostalgia of other 2D platformers such as the Castlevania series, Ghouls ‘N Ghosts, and even recent games such as Bloodstained: Curse of the Moon and Blasphemous. The visual changes that have been added to the Afterlife expansion are also evident, such as a slight change to the field of view, vibrant colors in the background, and a brand new look and layout to each area that are yet familiar to those who played the original, and refreshing to those who are playing Death’s Gambit for the first time. 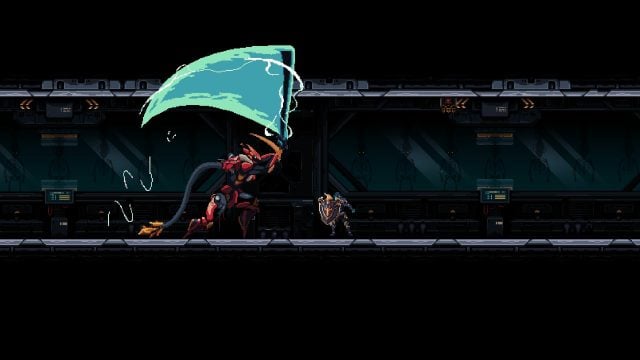 Priced at $19.99, Death’s Gambit: Afterlife offers a great price that consists of major changes and additional content. Depending on your actions, number of deaths, and progression, the Afterlife Expansion of Death’s Gambit takes about 12-14 hours to complete, but will roughly take a total of 18+ hours for completionsists to find everything in the game, as well as to unlock different endings. Clearly, the Afterlife Expansion makes Death’s Gambit feel like a proper and fully fleshed out Metroidvania game that revolves around upgrades, story progression, and exploration. 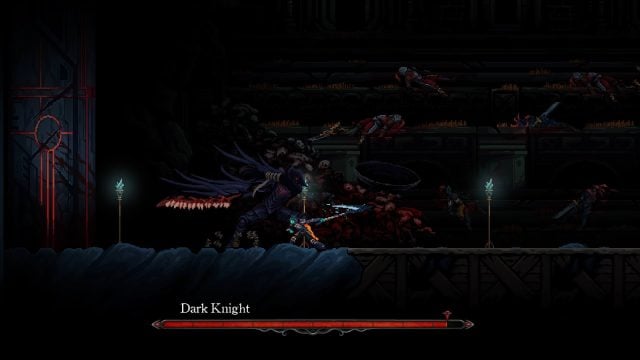 The Afterlife Expansion is indeed a love letter to those who played the original, which clearly shows that the developers have listened to their community and have even went beyond what is expected. Sorun’s journey may be familiar to fans of Death’s Gambit, but it also leans into building a new fanbase of those who enjoy games such as Castlevania and Dark Souls. Despite missing some additional content that I usually look for or have seen in other 2D Metroidvania ARPGs, such as side quests, Death’s Gambit: Afterlife stands on its own and should be a welcome addition to any Metroidvania fan’s library.

White Rabbit and Serenity Forge have both done an excellent job of producing more content, new features, and a simple yet impactful rework to the game. It is rare to see any developer put this much time and energy into a game that’s already released, and even more rare for them to do it over such a long period of time. If you’ve never played Death’s Gambit before, now is definitely the best time to check it out.

7.9
Summary: Death's Gambit is a game where developer passion shines through. The free expansion, Afterlife, revamps the game with excellent additions and provides a decent amount of content for the base game's asking price. While not the best Metroidvania you'll ever play, it's one that should certainly have a place on your list.
Story & Setting (7)
Gameplay (8)
Visuals & Audio (8)
Replayability (7.5)
Pricepoint (9)