In this Divinity: Original Sin 2 Beginners Guide, I’m going to be covering the 10 best Skills that can make just about any build better, no matter whether they are melee, ranger, or mage. There may be Skills that are better suited for particular Builds, but these can be used in nearly every Build effectively. So if you’re looking for ways to improve upon a Build you’ve already created, consider adding some of these to it.

Source Skills are not included in this Guide because most of them belong in specialized Builds, so it did not seem fitting to add them here. However, one fantastic Source Skill that I can recommend for any Build is Skin Graft. Of all the Source Skills in DOS II, it has the most versatility to fit into any Build you are using, and will usually enhance it tremendously. It is arguably the best all around Skill in the game, assuming you have Source, so if you need some extra fire power be sure to add it. 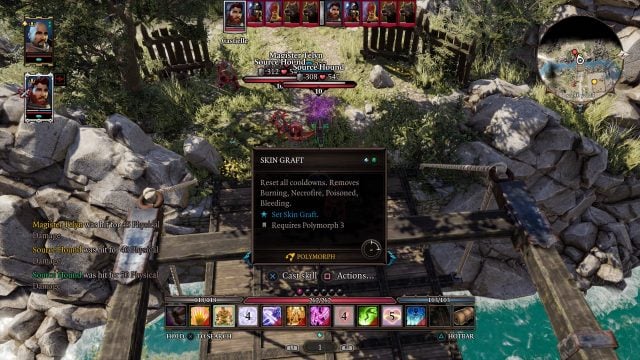 Coming in at number ten is Bone Cage. This Skill would actually be higher on my list if it weren’t for the fact that Mages and Rangers will typically get less use out of it since they are not usually in range to consume corpses as often. Still, it makes for a very effective method to replenish Physical Armour, providing 50% of the value of Fortify by default, and an extra 50% for each corpse consumed. For only one AP, this is still a good trade off, especially with the potential to provide much much more Armour than Fortify under the right circumstances. If you’re looking for a way to boost your Physical Armour, consider using this Skill, especially on your melee units. 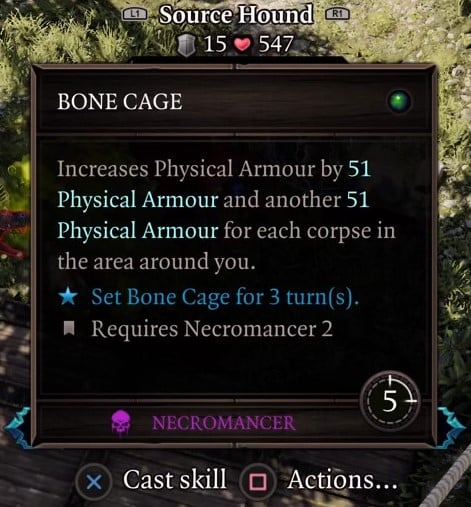 Coming in at number nine on my list is Dominate Mind. Dominate mind might be the most effective CC in the game, as it not only removes an enemy from the fight for 2 turns, that enemy then fights for you. The downside is that it has a hefty cost at 3 AP, and requires some investment into Summoning, which doesn’t benefit most Builds. However, often times as you acquire gear it will have bonuses on it to Summoning, and this can make for an easy way to acquire Dominate Mind without spending valuable Ability Points. I highly recommend this one on any Build that uses Summoning, or any Build that has a couple of points into Summoning because of the gear they are wearing. 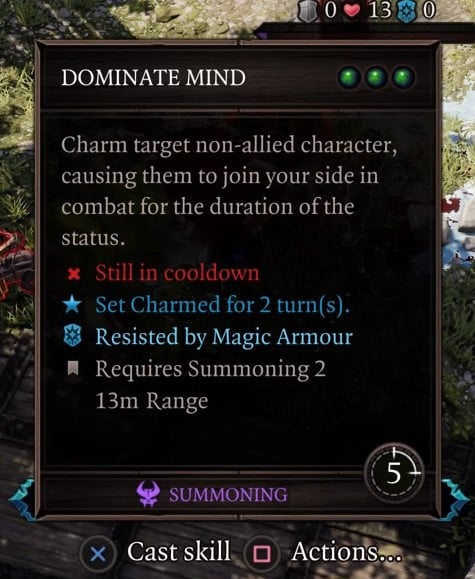 At number eight on my list is Challenge. This is a Skill that used to cost 2 AP once upon a time, and was far too expensive to use for the benefit it provided. However, it has since been updated twice and no longer costs any AP at all. This Skill boosts both Physical and Magic Armour, as well as providing a damage boost if you manage to kill the target in the allotted number of turns, which is not difficult to do whatsoever. This Skill would be higher on my list if it didn’t require 3 Warfare, and if you could acquire it before level 16. You should have this on every single character that has at least 3 Warfare if possible. 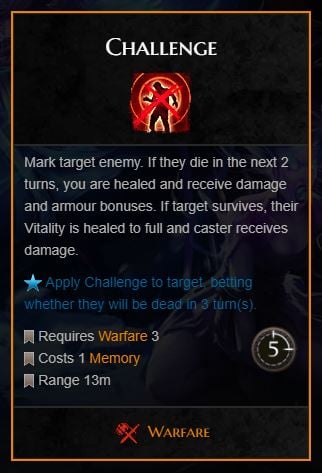 Coming in at number seven on my list is Tactical Retreat. This Skill is one of, if not the best mobility Skill in DOS II, costing only 1 AP and providing you with an extra AP the following round. It’s absolutely worth taking on any ranged character you have (Ranger or Mage), because they all can make use of the passive benefit that Huntsman provides, which is increased damage from elevation. This not only allows them to get out of harms way easily (and cheaply), but also boosts the damage they deal in the process, which is win/win. This would be higher on my list, but it is more challenging to justify this Skill on melee units who rarely see any passive benefit from Huntsman, but similarly to Dominate Mind, it’s worth taking on them if you have gear that comes with Huntsman on it already. 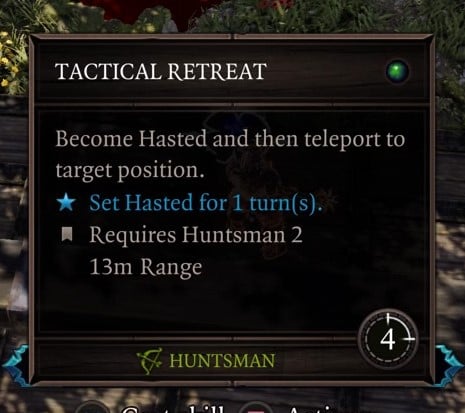 At number six on my list is Chameleon Cloak. Like Teleportation, this Skill has uses inside and outside of combat. You can use it to stealth by enemies you’d rather not deal with, or to help facilitate stealing in some cases. In combat it provides you with protection by making you Invisible for 2 turns, which is fantastic for only 1 AP. You can use this at then end of any character’s turn to help protect them from damage until their next one. It’s good on both ranged and melee characters, and even though sometimes it doesn’t always work exactly as expected, more often than not it can really turn the tide of battle. It also only requires 1 point into Polymorph, which is 1 less point into Aerotheurge than Uncanny Evasion which needs 2. 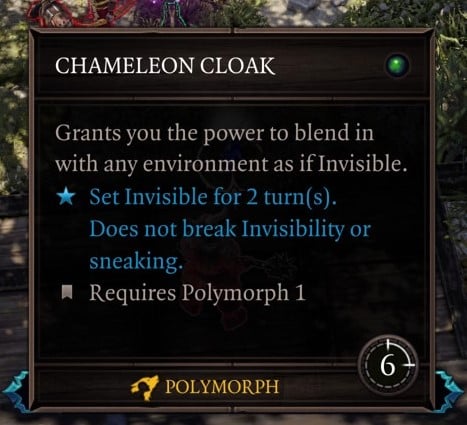 Coming in at number five on my list is Uncanny Evasion. This Skill is a fantastic way to prevent damage on the enemies’ turn, whether you are a ranged or melee character, but does not protect from all incoming damage. Instead it increases your Dodge Chance by 90%, making you nearly immune to all Weapon-based attacks, but still at risk to spells that can’t be Dodged. However, this usually works out fine because melee units can replenish their Physical Armour with the Living Armour Talent, and mage characters typically have more Magic Armour anyway. Additionally, enemies are still prompted to attack you, often wasting valuable turns and preventing other party members from being attacked, which isn’t the case with Chameleon Cloak. This Skill would be a bit lower on the list if it weren’t for the fact that Teleportation can also be acquired for the same investment into Aerotheurge (2 Points), which helps to justify its cost. 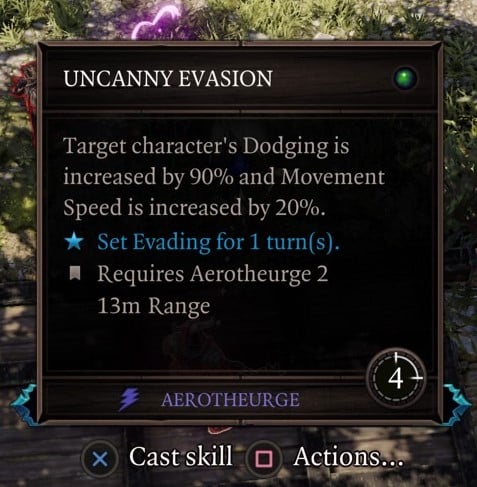 At number four is arguably the best overall utility Skill in DOS II. Teleportation can be used in so many ways it would take an hour to list them all. Whether it’s inside or outside of combat, you can almost always find a use for Teleportation that justifies 2 points into Aerotheurge (especially if you take Uncanny Evasion as well). Ranged characters can use this ability to move enemy melee units far far away, often preventing them from taking damage for several turns, and sometimes even giving them an elevation bonus if they drop them some place lower. Melee units can use this to group up enemies, or to bring some far away high up target down to them into melee range. In short, you can’t go wrong with this Skill, though you probably don’t need it on every single character in your party. 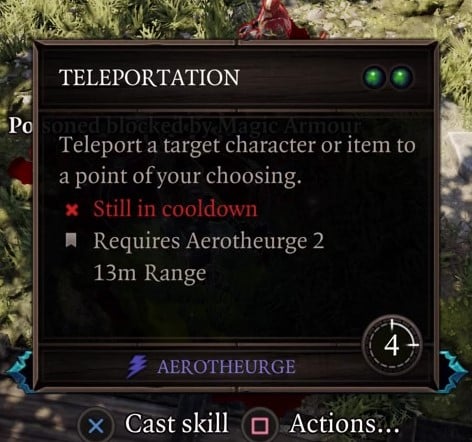 Coming in at number three is Armour of Frost. This Skill not only boosts Magic Armour on any friendly target, but it also protects against a number of CCs and status effects (or clears them if the target already has them). It can be used easily and effectively by every character in your party, and is available from the very beginning of the game. Managing your Armour values in DOS II is vital to success, and this Skill can help you achieve it because it only costs 1 AP and 1 Point into Hydrosophist. If you need Magic Armour, consider taking this Skill. 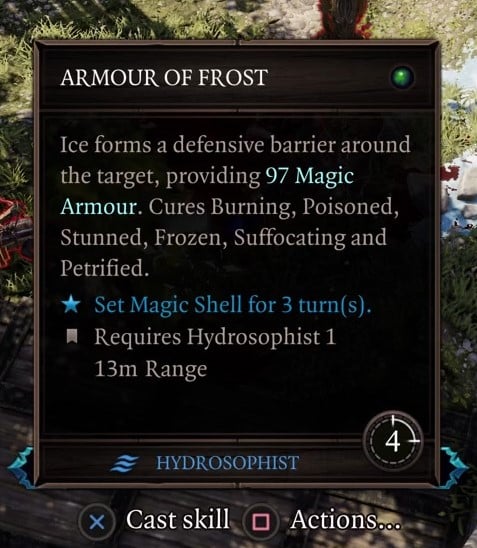 At number two on our list is Fortify. Just like Armour of Frost, this Skill boosts Armour, only this time it increases your Physical Armour instead of Magic. It clears and prevents against less Status Effects than Armour of Frost, but enemies tend to do more Physical Damage, particularly early on in the game, which is why I’ve listed it in the number 2 spot ahead of Armour of Frost. It also protects you from being Teleported, which comes in handy further on in the game, and can be extremely annoying to deal with otherwise. Again, managing your Armour is the key to victory in DOS II, and this Skill can help you achieve it for 1 AP and 1 Point into Geomancer. 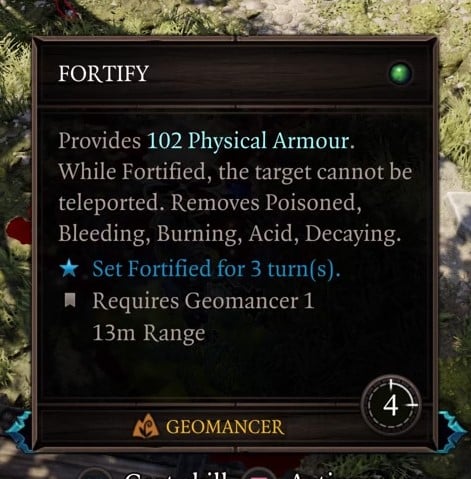 Coming in at the number one spot is Adrenaline. This Skill is the pound for pound king of utility Skills inside of combat, and will vastly improve the performance of any character in your group. By allowing you to extend your turn with 2 more AP, you can often control situations resulting in better outcomes for you and your party. It does come with the drawback of losing 2 AP the following turn, however, more often than not (when used properly) you’ll come out on top. This is because combat is usually a race to strip Armour and CC your enemy before they do the same to you, and this is more easily achieved with additional Action Points. Once your targets are CCed, it’s all downhill from there, and this Skill only requires 1 Point into Scoundrel which is easily manageable on every single character you have. 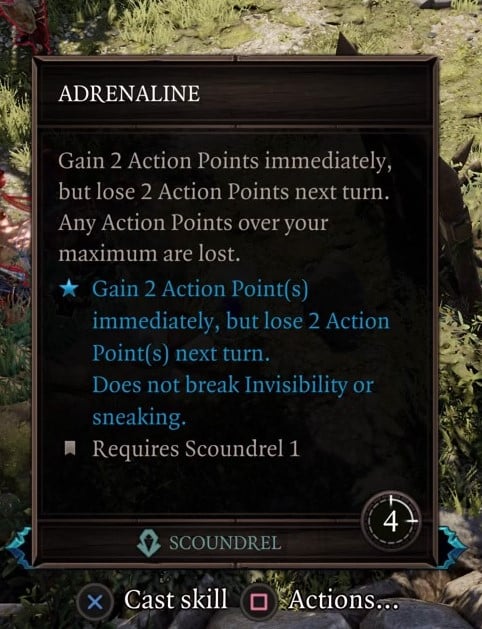 This concludes our content for Divinity: Original Sin 2. With the Early Access for Baldur’s Gate III just around the corner now, I’ll be shifting my focus to that. I’ve already begun a guide series explaining the basics of 5th Edition Dungeons and Dragons for those who are interested, and of course I’ll be adding Class, Build and Beginners Guides a bit closer to Early Access. I hope to see you all there! Good luck Sourcerers, Rivellon is counting on you!