Divinity Original Sin 2 Definitive Edition has been out for a bit over a month now, and with it came some interesting changes to the game. While most Builds remain untouched, there are some tweaks to a few of them. Players have been asking me to not only update these Builds, but also create new ones. In this guide I will be introducing the Venomous Sentry, and explaining just how it works. 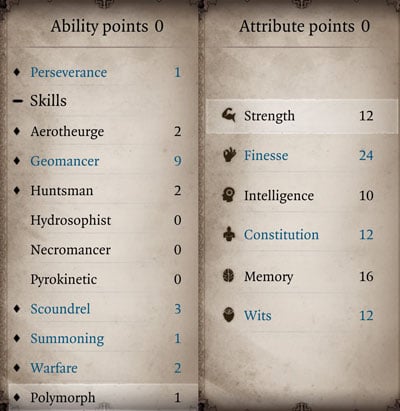 The Stats on my level 10 Venom Sentry. Keep in mind you can spend point on Wits over Finesse, if you’d like more Crit Chance.

The Venomous Sentry is a unique Ranger, one of few possible Builds that can make use of the Elemental Ranger Talent, in addition to using the Reactive Shot skill effectively. The general concept of the Venomous Sentry is to buff your Poison Damage through Skills like Venom Coating, Elemental Arrowheads and Siphon Poison, and then unload upon your enemies. This Build does a mix of Physical and Poison Damage, because of the use of a Bow, but focuses more heavily on the second one. 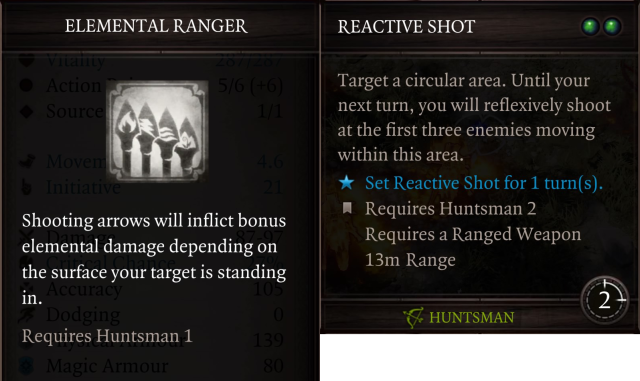 These two things make up the core of the Build.

Because the Venomous Sentry uses a lot of AP to buff its damage, it doesn’t have a lot of AP left over to attack, which is the main issue with using the above Skills. This problem is rectified by using the skill Reactive Shot, which allows you to attack up to 3x for 2 AP. Because the attacks done with it are basic attacks, the Venomous Sentry will deal increased damage by using the Elemental Ranger Talent, if the enemy is standing in Poison, Fire, Water, Oil or Electricity. Of these types, Poison, Fire and Electricity are ideal, because they will provoke the enemy to move, triggering Reactive Shot.

The best way to start this Build is by picking the Wayfarer Class, placing all points into Finesse, and selecting Elemental Arrowheads, Ricochet, and Contamination. You can use Human for the Crit Chance/Damage, Elf for Flesh Sacrifice or even Undead for the Poison Immunity if you wish. All work well for this Build, making it quite flexible.

As far as Attributes go, you have 2 options. You can place points into Finesse, increasing your Physical Damage dealt, as well as increasing the Poison Damage that your weapon has on it. This is probably the best option early on, before you gain more of the Skills you need for this Build, and before your Geomancer is very high. Or, you can increase Wits instead of Finesse, to increasing your Critical Chance, improving your average Poison Damage. I would recommend doing this later in the game, when your Critical Chance is already around 20% from equipment alone.

Armour-wise you can really use whatever you wish, but Finesse probably makes the most sense, particularly early on when the Build will be played more like a traditional Ranger. You want to look for Armour with Geomancer, Huntsman, Wits and Critical Chance. This is a very focused Build, and these things will help to increase your Poison Damage the most, forsaking anything that boosts Warfare.

Weapon-wise, you’ll want to look for a Bow or Crossbow that deals Physical and Poison Damage if possible. You’ll want to make sure that it has a Rune Slot so you can further increase the Bow’s Poison Damage with a Venom Rune. Besides these 2 things, Critical Chance is the single most important thing you can add. Set Poisoned, Set Burning, Set Suffocating, or Set Bleeding are also all great choices as well, because we’ll be using the Torturer Talent, and that makes these Statuses apply 100% of the time when on a weapon. 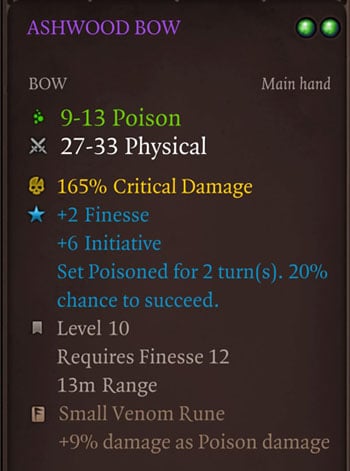 This is a pretty poor Bow, but it does have Poison Damage and Set Poisoned. Do not forget to add further Poison Damage to your weapon via Poison sources like Barrel of Ooze!

Hothead – This Talent will increase your Critical Chance, which will further boost your Poison Damage (when you Crit). Make sure to keep your Vitality at maximum when using this, or you will gain no benefit.

Elemental Ranger – Very few Rangers use this Talent because it only affects basic attacks, which rarely deal a Magic Damage type when playing a Ranger. It works well here because of the Reactive Shot skill, which does Basic Attacks, and because we’ll be focusing on Poison Damage. This will increase your Poison Damage by ~20% when using this skill, and when just attacking in general.

Executioner – You will use a lot of points buffing with this Build, so gaining extra AP goes a long way towards improving the performance of this Build. You will have to invest a point into Warfare in order to take this at level 8.

Torturer – This Talent works well because it allows you to Set Poisoned, Burning, Suffocating and Bleeding 100% of the time when attacking. This means if you had all of these on your Bow, you could set them all at once with just 1 basic attack, or on multiple enemies with Ricochet, Barrage or Reactive Shot.

Venomous Sentries use a mix of Huntsman and Geomancer Skills in order to boost the Poison Damage they deal with their Bow attacks. Below is a list of Skills you will use and I will put them in the order you should obtain them in.

Elemental Arrowheads – This skill will allow you to coat your arrows with elemental damage if you are near a surface that contains one. Ideally this would be Poison or Oil, because points into Geomancer will increase the amount of damage you will gain from this skill.

Ricochet – A great way to deal damage to multiple targets and spread around Status Effects once you have the Torturer Talent. Use this when you can hit at least 2 enemies.

Contamination – A great way to turn surfaces to Poison, which serves two purposes. First it will allow you to use Elemental Arrowheads on it, adding Poison Damage to them. Second, enemies standing in Poison will attempt to move on their turn, and that will trigger Reactive Shot if you have it deployed around them. Combine this with Rain for best results.

Adrenaline – You will need the extra AP to buff yourself and attack, and this skill will make this possible. Use it to cast Elemental Arrowheads, Venom Coating, Siphon Poison, Tactical Retreat and still get a Reactive Shot or Ricochet off on turn one.

Venom Coating – This skill only scales with Geomancer, and not Intelligence, making it work well for this Build. This will be the best way to boost your Poison Damage for most of the game.

Fortify – Since you will have high Geomancer, this skill will perform exceptionally well in this Build. Use it to buff yourself or a party member to increase their Physical Armour as necessary.

Tactical Retreat – This skill will allow you to get positioned perfectly once combat begins, and this Build depends heavily on good positioning. Because you need to get Ricochet or Reactive Shot off in order to be effective, this will help you to do just that.

Barrage – This skill is a great way to spread around Poison Damage by hitting 3 different targets, or 1 target 3x. Once you have Torturer and Status Effects on your weapon, you can apply them as well with this skill.

Ballistic Shot – This skill is just a great way to apply increased Poison Damage by adding +5% damage per meter you are from your target. Use it when you need to deal a lot of damage to a single target.

Reactive Shot – This is a huge part of the Build because it allows you to spend many points buffing and still get 2 or 3 attacks off in the same round. Make sure you have a surface under the enemy that will cause them to move before using, or it will be wasted.

Siphon Poison – This skill will suck up Poison around you and apply it to your Bow damage. You will use it situationally, and make sure when you do it’s after you use Elemental Arrowheads, so you don’t remove the surface needed to add Poison Damage first.

Arrow Storm – Once you reach level 16, this will be your go to Source Skill that will apply Poison to everything in a huge area. Slot it, and make Poison fall from the sky!

These are of course not the only Skills you can use, and there are others that may come in useful, but some will depend on party make-up. For example, if you don’t have someone in the party with the Rain skill, then it’s advised that you take it in order to create huge poison pools. In addition, Ignition and Bleed Fire can be added to create Fire surfaces, prompting more enemy movement, and granting you the Elemental Ranger bonus.

The trick to this Build is placing surfaces under enemies that trigger a “move” action from them, allowing for Reactive Shots. Not only will you gain many attacks this way, but you will add the Elemental Ranger bonus damage to these shots, because it hits them before they move off the surface. Contamination, Ignition and Bleed Fire are all great ways to make enemies do this. 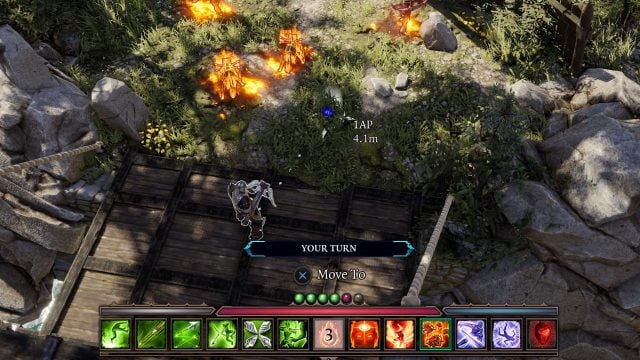 Bleed Fire will place a Fire surface under each enemy in the AoE, forcing them to move on their turn.

Enrage can also work extremely well with this Build, if used correctly. This will nearly double your damage on all your attacks if you are a Human and have many points into Scoundrel. If you can, try to use it when you know you can get 2 or more Reactive Shots off on the enemies turn, allowing you to make the most of it.

Consider adding Teleport to this Build in order to place enemies where they need to be in order to make the most of Reactive Shot. Since this Build is an AP hog, it may be wiser to have other party members do this for you, however. It’s always a great idea anyway, to have 1 or more party members have this skill, no matter your composition. 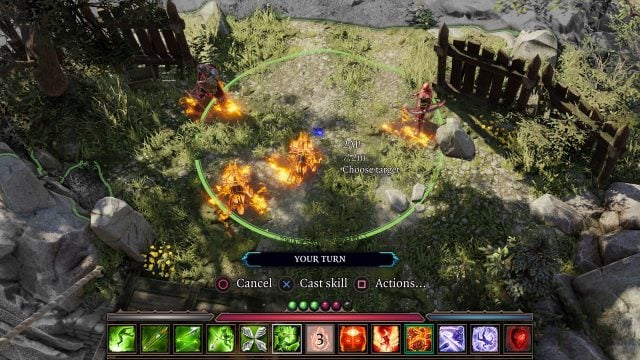 Teleport can come in handy to move enemies into range where you can get more attacks. Ideally other party members would use it, in order to save you the AP.

This Build works best in a party where other party members deal Fire or Poison Damage because this will prompt enemies to move more often, making Reactive Shot more useful. Since you will be doing primarily Poison Damage once you hit Act 2, try to use other Builds that compliment this playstyle like Blazing Deepstalker, Terramancer, Summoner of Sparks, Scourge Wizard, or the Occult Flameweilder (coming in the next Guide).

Lastly, you can also pump Warfare along side Geomancer if you wish to deal more Physical Damage. This isn’t an optimal setup, but it can be useful in some parties where they deal a mix of damage types. Warfare also increases the damage of the special Elemental Arrows you can use, so if you want some more flexibility, consider doing that instead.

As always, be sure to check out our other Build Guides, and good luck Sourcerers, Rivellon is counting on you!