In this Sekiro: Shadows Die Twice Guide we’re going to be taking an in depth look at the Mist Raven Prosthetic Tool. This is the seventh of 10 such guides, exploring every facet of these. From explaining just what each upgrade does, to how they can best be utilized in combat. I’ve decided to do the Mist Raven next because it’s perhaps the most intriguing Tool of them all.

You can find the Mist Raven Prosthetic Tool in the Hirata Estate, not too far from the Bamboo Thicket Slope Idol. Head forward and grapple up the left cliff, then hop into the water and swim forward until you can grapple out on the right. Head forward again and break some bamboo on your right, then wall jump up and head left to the shrine. Defeat the purple ninja there and loot the Mist Raven. Take it to the Sculptor to gain this Tool. 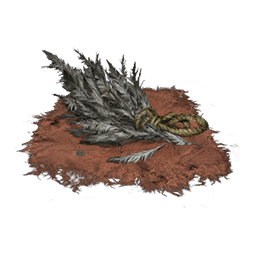 The Mist Raven Prosthetic Tool allows the player to teleport in any direction after being struck while in Mist Stance. Mist Stance is activated by pressing R2, and only lasts about 1 second. This means you must time your R2 almost perfectly in order to pull off the teleport. If you don’t get hit while activating Mist Stance then you will not spend any Spirit Emblems. Note that if you don’t press any direction when using Mist Stance you will teleport straight up into the air.

Fang and Blade is nearly a must for this Prosthetic because it allows you to attack in a wide sweeping arc from behind, or a plunging attack from the air. This sweeping attack hits multiple enemies for lots of damage, making the Tool more useful when facing multiple enemies. In addition, it closes the gap between you and your opponent nearly instantly, increasing the time you’ll be able to attack from directly behind the enemy. 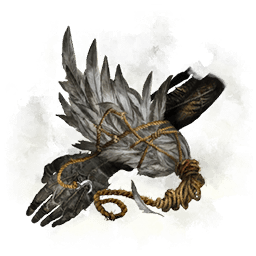 The Aged Feather Mist Raven allows you to use the same teleport in the same manner, but also if you’ve been struck by an attack, knocked down or staggered. This upgrade is an improvement because there will be times when you will fail in your timing of Mist Stance, and this will allow you to teleport in many of those instances. On top of that, it will provide you with a quick means to escaped if the enemy is going for the kill shot while you lie on the ground. You can quickly go from being nearly dead, to right behind the enemy hitting them in the back in the blink of an eye. 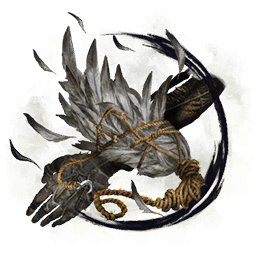 The Great Feather Mist Raven is hands down one of the best Prosthetic Tools in Sekiro. It has the same functions as the previous iteration of this Tool, but also leaves behind a fiery explosion. This explosion deals Burn Damage in a trail following you, and can set the Burning Status Abnormality. This allows you to set enemies on fire, while you teleport through or above their attacks, on top of the damage you deal from Fang and Blade and follow up hits. This works amazingly well against a single target, or a group of enemies.

When used in conjunction with Oil, the Great Feather Mist Raven can hang in there with Okinaga’s Flame Vent in terms of damage by providing you an opportunity to attack into the back of the enemy. In addition, you will be invulnerable during the fire attack, making it less likely you’ll get hit. Consider using this Prosthetic if you plan to use Oil, and would like a bit more mobility. 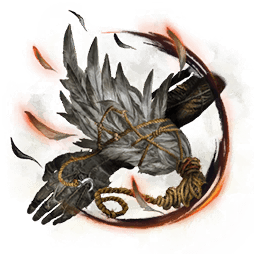 The Great Feather Mist Raven works exceptionally well in both the Guardian Ape and Headless Ape fights. This is because it isn’t hard to set the Ape on fire, and in the Headless Ape fight, you can teleport through simultaneous attacks while dealing damage to both Bosses. Don’t forget to use this from the ground if you get knocked down, it can set you up really nicely and can get you out of a tight jam.

Be sure to get the Fang and Blade Prosthetic Skill if you plan to use this Prosthetic Tool as it makes it infinitely more effective. It only costs 3 points into the Prosthetic Arts Tree in order to get it, so you can have this by the time you get the base version of this Tool. You will not regret it.

Fang and Blade works tremendously with this Prosthetic Tool.

The Mist Raven is a fantastic way to deal with Bosses and Mini-bosses that use many different Perilous Attacks. Since it isn’t always easy to discern if it’s a thrust or a sweep attack being performed, this can make things a bit easier by simply press R2 no matter which is the case. Just keep in mind that this Prosthetic can not be used on grab Perilous Attacks, so you’ll still have to be on the look out for those.

If you are taking damage over time from Burning or Poisoned you can use the Mist Raven at will. This increases your efficiency with this tool because enemies often have long wind ups, that you can get behind much earlier in the swing, allowing for more attacks before they finish.

One way you can become Poisoned easily is by using the consumable: Contact Medicine. When applied you will gain a much milder form of Poison, taking less damage than you would regularly. This allows you to use Mist Raven in any scenario, not just ones that involve Poison. You can farm this item from the infested Monks in Senpou Temple Main Hall if you have the Mortal Blade, or if you have the Golden Vortex. 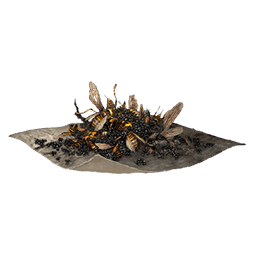 The Infested Monks in Senpou Temple drop this.

Lastly, the Mist Raven can be a life saver if you are fighting an enemy that has long combo chains and you are about to be Posture Broken. Hit Mist Raven just before your Posture breaks in order to retreat or get away from the combo, turning a bad situation into an opening to attack.