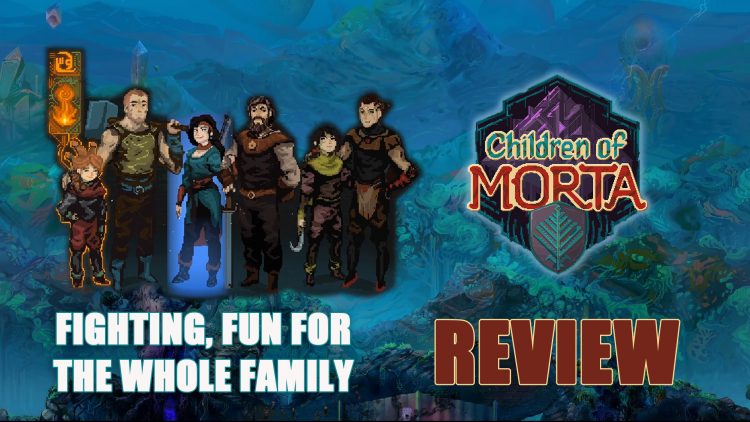 Dead Mage released Children of Morta earlier this year on PC and have now brought their rogue-lite to consoles. Taking the family members of the Bergsons for a spin, with a variety of combat styles and challenging corrupted creatures, we explore what makes this title worth its pricetag.

Children of Morta Review – Fighting, Fun for the Whole Family

Children of Morta puts players in the shoes of the Bergsons, a family of heroic fighters who must push back the Corruption that has now begun engulfing their world. Each member of the Bergsons have their own personal fighting style and individual personalities. You can experience each playstyle by choosing a different family member each run if you so wish. It’s a family affair as Uncle Ben will help you upgrade your stats. As you get further and further into the perilous caverns, you will discover more about each of the family members as well as the evil that is spreading across the land. 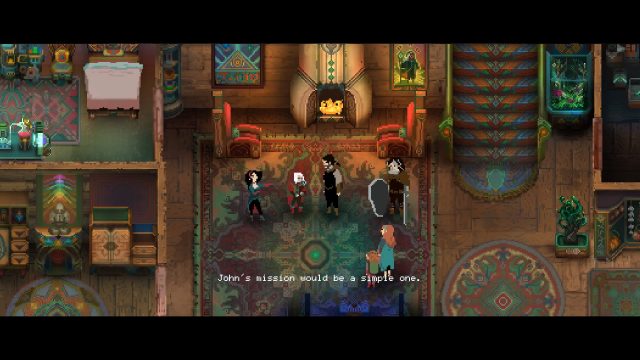 I wasn’t sure what to expect in terms of narrative for Children of Morta, but Dead Mage somehow made me care about these little pixel family members of the Bergsons clan. There were some distinct moments where you will feel compelled to take down evil creatures, whether it be helping those who can’t defend themselves or even a loveable wolf pup from the clutches of corrupted beings. It was a mixture of being rewarded with further story by defeating a boss or getting past a certain area that just makes you feel motivated to fight on. 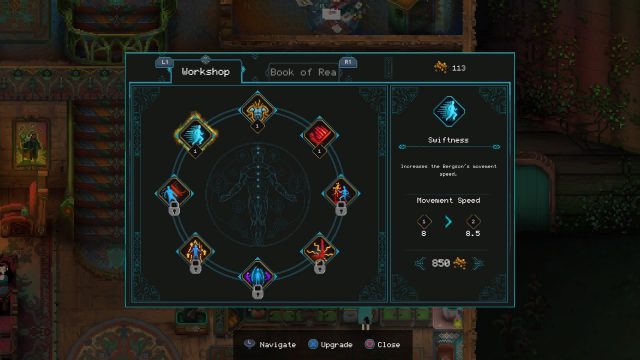 You do have a few non-playable characters in the form of carefree Uncle Ben who seems pretty eager to hand a pair of daggers to his nephew without consulting his parents first. But don’t worry Uncle Ben will help you upgrade stats back at the home base, so he does have some uses. There’s also mystic grandma who just seems to know what’s going on with her clairvoyant abilities, showing up at the strangest of moments as well as helps you unlock some perks such as increased gold from your runs. Each of them add their own charm to this quirky family of fighters.

There are a number of family members you can unlock with the story, as you progress you will gain access to the dagger wielding Kevin who just wants to be part of the fight. Or the long absent Mark who is welcomed back into the fold after returning ill, but once back on his feet is very talented in martial arts and has a cool whip that stuns. There is a lot of choice when it comes to different playstyles, something for everyone, range, close combat, sword and board. While most games make you stick to a certain build and only let you change by respeccing or starting a new game, Children of Morta provides a lot of flexibility to change when you need to and in fact encourages you to try out different fight styles through the different family members. The skill trees are fairly simple, but because they have an added bonus of family abilities this adds a further degree of enhancement. 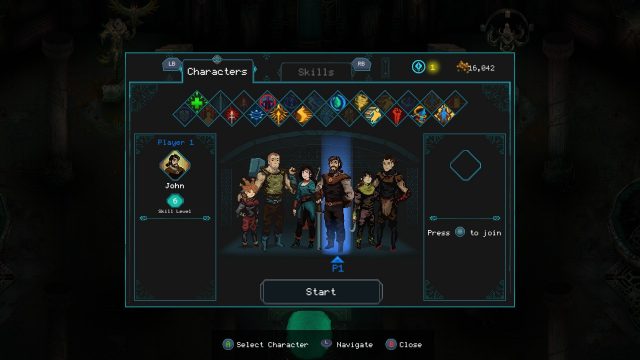 While you’re the one in control of how fast you progress through levels, there feels a bit of a gamble as you try to make your way through. You don’t know when you will find your next healing potion, or a good rune, and you could end up with some bad RNG at times, but this is the fun of it. Its up to you to risk your health to get to the next room, or to take it slower to ensure your survival. Personally I like wreaking havoc and diving straight in but you could be punished with an onslaught of mobs at the next corner. While you might come across another way to heal later on, potions are the most common way to regain health and they have to be used on the spot, no saving them like an Estus flask for the right moment. 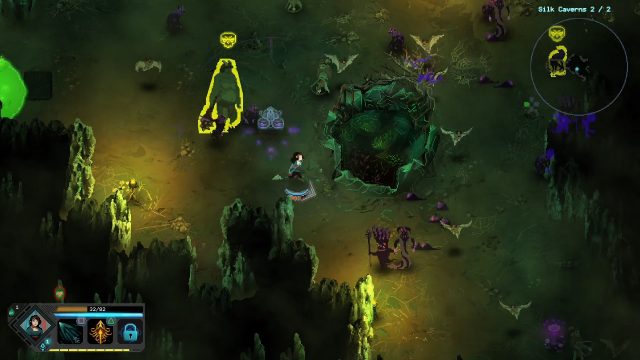 Did I mention when you die you lose all the gained charms, runes and items you’ve found that run? Well you’ll still have your gold to upgrade some basic stats, but you will need to start from square one and fight through the procedually generated rooms all over again. There were definitely some moments where I was annoyed by a misstep and had restart a run, but it was honestly hard to put the controller down as I just wanted to keep going. There are also puzzles that can reward you with some nice items, but some can rely on memory and others are just pure luck.

What’s great about combat is that each run you take, you can choose a different character, which keeps gameplay fresh. Leveling up each character will unlock new abilities and even ones that can affect other family members. While each playstyle is individual, you can help enhance other characters with family skills which can be gained by using skill points. The whole concept really sticks to the idea that family is important, whether in narrative or even combat. You unlock characters as you progress, meaning they’re not all available at the beginning. For some this might be a bit disappointing if you wanted to start off your game hurling daggers or using martial arts, but I found this was a great way to be introduced to characters individually and at a good pace. The only minor set back is that you have to level these newly unlock characters, which will be trickier in harder areas throwing you in the deep end, but you could always go back to easier parts to get use to a character’s set of moves.

I hadn’t the chance to experience Children of Morta on PC, so I couldn’t really give you a comparison between using a controller versus KMB. However, I found that some classes felt much easier to control than others. The archer Linda for example needs a bit of aiming for her arrows, and this can be tricky when you’re running around to avoid taking hits from mobs, but once I got use to it, Linda became one of go-to’s.

Mobs introduce a number of different mechanics, whether these be slowing webs or deadly AOE green acid pools. Each map ends with a boss fight which are engaging and come with their own set of challenges. While you can stick with the same character each run, there is a further motivator to keep you switching, the Corruption. The Corruption adds a negative effect on the health of the character you’ve last played, and only with some much needed rest, can they recover from the health debuff. This might not be to everyone’s taste, but it gave a good reason to level up other characters and experience other playstyles. If you want a further challenge, you could even playthrough with the corruption effect.

Each character has their own set of unique abilities which complements their class, for example the archer Linda has ranged attacks with an AOE arrow fall. While John your sword and board guy, has abilities to help enhance his melee combat and has a cool Thor like lightning ability. What’s great about Morta is that you choose different characters each run, as one character’s abilities can be more useful in different situations or even boss fights. I would find some boss fights quite challenging with one character, then switch to another and finding a whole new way to tackle the situation. 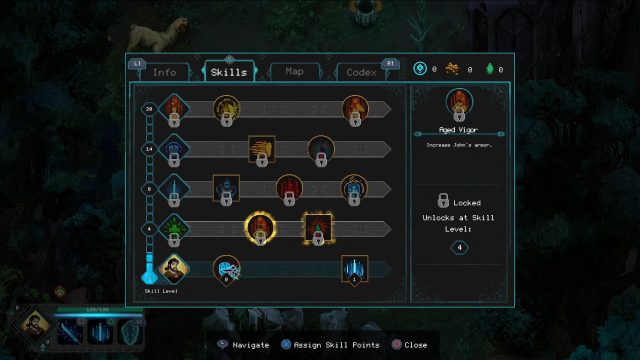 There are a lot of items that can help enhance your character’s abilities, even adding temporary buffs or changing the way your primary attack works by for example, adding the rune Venom Kiss to arrows will poison your enemies. This really mixed things up and a lot of it can rely on RNG as you don’t know when you will find these items. While you won’t be dealing with inventory management, you will find yourself deciding which Divine Relic to keep. There are also Obelisks, which can add temporary damage buffs that if you’ve played Path of Exile will find familiar. While some of these may not be groundbreaking, the mix of being able to find these randomly throughout levels and different runs giving you a variation of items, can really make the gameplay feel different each time, and works well with combat. This also plays into replayability, there is plenty here that can change how each run happens.

The title is in a 2D pixel art style in an isometric view but has tonnes of detail with many beautifully created backgrounds and scenery. Visual effects are well matched with their actions and the audio crunching of the skeleton type enemies as they are defeated is quite satisfying to hear. As you complete more of the story, your home base begins to grow and adds further additions, making you feel like you’re actually making an impact on the world around you. The narrator was one of my favourite parts about the game, while the characters aren’t voice acted, the story telling was fantastic and just as immersive. 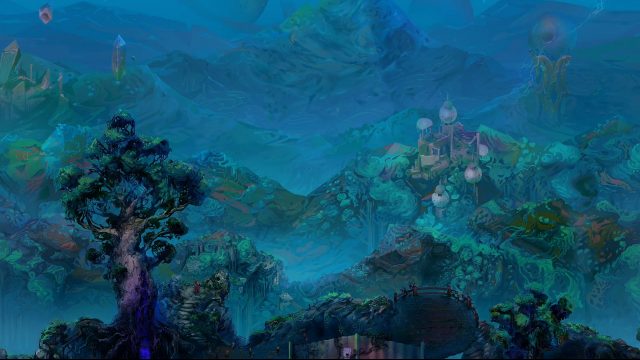 Children of Morta is a really addictive game, because there are many ways to play. Not only does the narration captivate your attention, pulling you into the world but motivates you to keep progressing. There’s a good balance of risk and reward in this roguelite, while combat it challenging you feel there is plenty to keep you playing if you don’t defeat certain enemies on your first try. I would say its less aggravating than Souls-like fights, but still enjoyable and enough to keep you hooked. 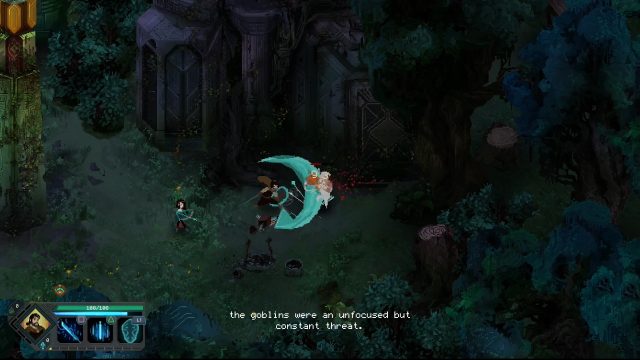 There are elements that remind me of such games a s Moonlighter, whether it be the pixel design or even combat you face, same goes with Path of Exile with the temporary buffs/damage affects, however the developers have made a game that combines these and adds other compelling features which makes the game really enjoyable to play. The game has quite indepth systems that you forget you’re playing an indie title at times, as it does a great job of providing a polished gameplay experience. I would highly recommend you check this game out if you enjoyed the previously mentioned titles, even if you’re not a fan of the rogue-lite genre, as it offers a great deal for a pretty decent pricetag.

Children of Morta is available to play on PC, Xbox One and PC. Coming to Switch on November 20th.

If you want more game reviews be sure to read next Disco Elysium Review: Dark Humor Goes Detective and Code Vein Review: More Than A Souls-Like. For more pixel mayhem you can also take a look at CrossCode Review – A Fast Paced Sci-Fi Puzzle RPG.

8.3
Summary: Children of Morta combines all the best bits from rogue-likes mixing a compelling story, unique character playstyles and making the game really enjoyable to play. Non-rogue lovers shouldn't be deterred as this game has plenty to offer and soon will have you hooked on it's quirky family members and addictive gameplay.
Story & Setting (8)
Gameplay (8.5)
Audio & Visuals (8)
Replayability (8.5)
Pricepoint (8.5)